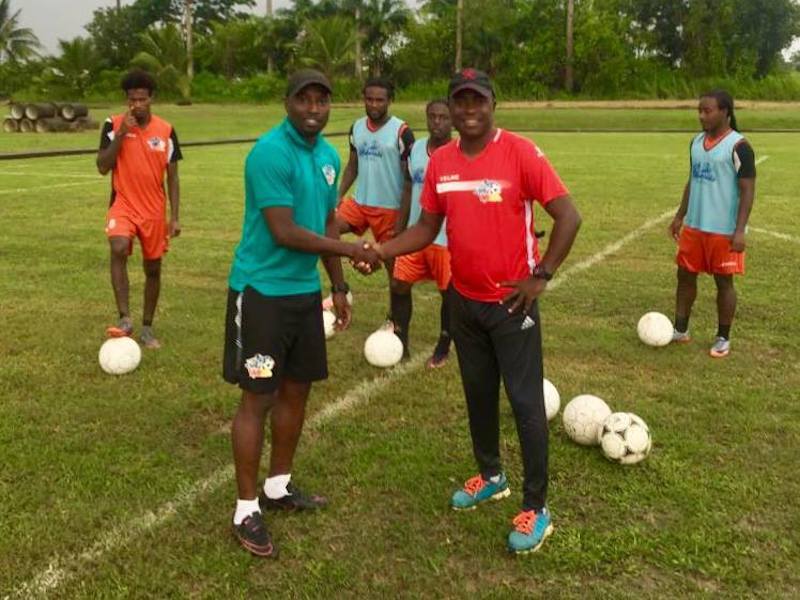 Glen, who will turn 38 in October, said with his body now unable to take on the rigors of continuous competitive training, it was finally time to move on after almost two decades on the grind.

The former T&T frontman will walk out the tunnel for the first time as a member of a coaching staff — which includes Michael “Brow” Maurice as goalkeeper coach — on Sunday when Sando host Police FC from 6pm at the Ato Boldon Stadium in their opening Pro League match of the 2018 championship, following a 4pm clash between W Connection and St. Ann’s Rangers.

The opening round of league matches however kicks off with a Super Friday double-header at the same Couva venue when San Juan Jabloteh takes on Point Fortin Civic from 6pm and Defence Force FC and Morvant Caledonia United tangling from 8pm.

“It wasn’t a hard decision [in joining Angus Eve],” said Glen, who said it was always his passion to give back to football through coaching.

“There are only a handful of coaches I think I can work under, and Angus Eve is one of them. He is to me probably the best coach in the country.

“Playing with, against, and for him (Angus) was always exciting. Now I can only look forward to good things working alongside him. I like his philosophy as a coach. He likes total football … attractive football and he is always willing to try new things in terms of strategies and formations based on the opponents. It’s a great opportunity for me to learn more as a coach in this environment.”

But Glen, who said he dipped his toes into coaching youth level players during his last two seasons in India, had hoped to take over as coach of his alma mater East Mucurapo (formerly Mucurapo Senior Comprehensive) for the upcoming Secondary Schools Football League (SSFL) season.

Mucurapo, though, decided to carry on with another former T&T player and ex-student of the school, Dale Saunders. Eve, on learning of his former teammate and player’s coaching interest, pounced on the opportunity to offer the role of assistant coach, which Glen welcomed.

“He (Glen) has loads of experience having played in leagues all over the world,” said Eve, T&T most-capped player who played alongside Eve at national and club level with Jabloteh. “…and we have loads of youngsters at Club Sando who can benefit from the invaluable experience of Cornell Glen.

“I asked him if he was interested in working with me and learning some more in terms of coaching and here we are today.

“I’ve involved him with the whole team in the sessions so far. But obviously I am going to tap more into him on working with the strikers. It will allow me more time with the midfield and defence,” explained the Sando coach, who worked with Glen at San Juan Jabloteh and the now defunct Ma Pau SC in the past.

Eve last coached Glen at North East Stars in 2013 before the then striker took on a fresh challenge in the India’s I-League.

“I want to help improve the strikers in particular,” Glen said of his new role as Sando assistant. “I want to improve the team’s ability to create and score goals. I also want to do my part as any assistant coach to bring fresh ideas to the team.”

Glen, one of T&T’s top complete strikers of all time, made his first overseas move in 2000, joining Sanjoanense in Portugal after kicking off his career with Futgof. He later swapped continents making the rounds across five Major League Soccer (MLS) teams: Metro Stars (now New York Red Bulls), FC Dallas, Columbus Crew, Colorado Rapids, LA Galaxy and San Jose Earthquakes, during which time during which time he had returned home twice for spells at Jabloteh, the club he first joined following his stint in Portugal.

Glen’s career, which was marred by injury, included late stints in Vietnam with Song Lam Nghe An and in India with Shillong Lajong, North East United, Mohun Bagan, Ozone, and Bengaluru FC. He enjoyed Federation Cup (India) success with Mohun Bagan and Bengaluru in 2015-16 and 2016-17 respectively.

Glen returned home in 2017 and joined University of Trinidad and Tobago (UTT) in the second tier of football before representing Central FC, coached and captained by his 2006 World Cup teammates Stern John and Densill Theobald respectively, in the group stage of the 2018 Caribbean Club Championship in February.

Trinidad and Tobago’s participation at the FIFA World Cup in Germany, like most, if not all members of the historic Soca Warriors team, stands the most memorable achievement of his career. “Qualifying for and playing in a World Cup; I don’t think anything else can beat that,” said Glen.

Disappointed in the state of football in T&T at all levels over the years, Glen believes T&T lacks proper infrastructure -- pointing the blame at administrators -- to help with the growth of players. He said that players should not be at fault.