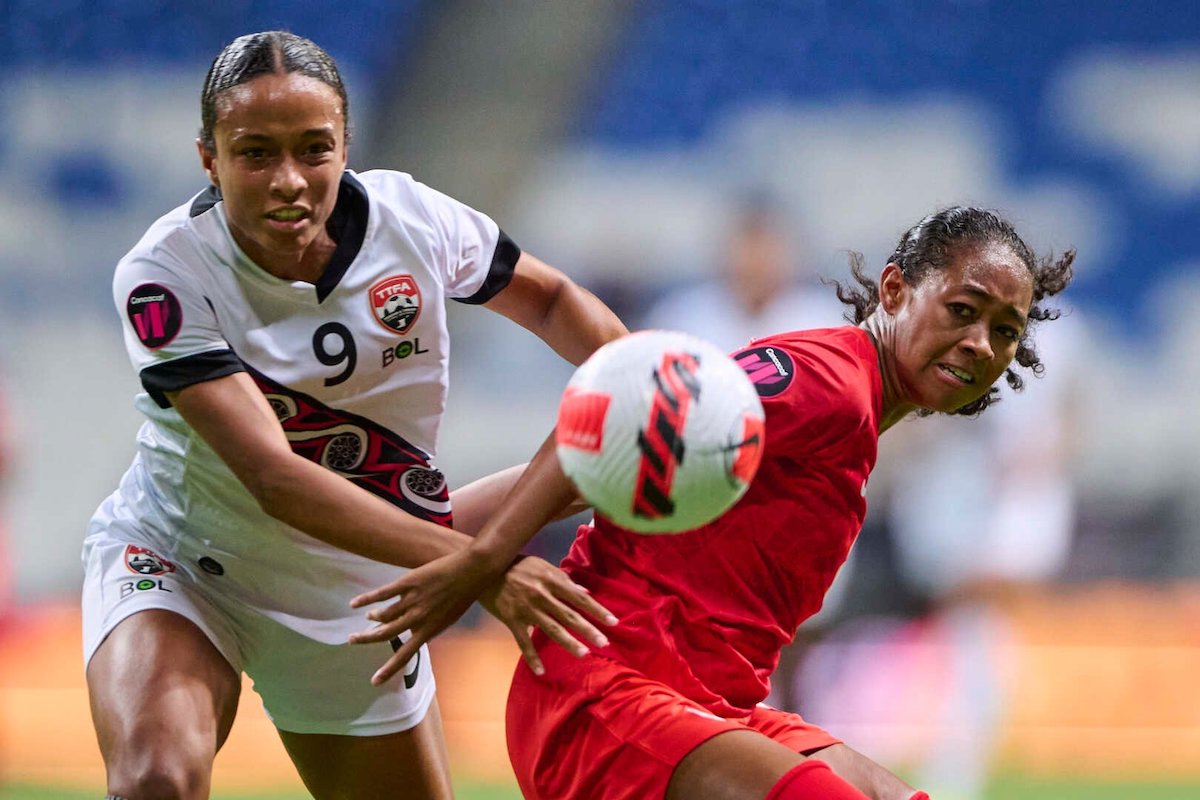 A naive second half performance saw Trinidad and Trinidad and Tobago’s senior women’s national football team concede five goals on the way to a 6-0 defeat against Olympic champions Canada in their CONCACAF Women's Championship opening match on Tuesday night at the Estadio BBVA, in Monterrey, Mexico.

With a bit of luck and a couple of acrobatic stops from goalkeeper Kimika Forbes, the Women Warriors escaped with a 1-0 first half deficit, conceding only Christine Sinclair's header. But they would fold in the dying stages, when conceding five second half goals.

The Caribbean team managed a single attack, with Brittany Jolie St Louis getting a header onto a 71st minute free kick, resulting from a foul on second half substitute Maria-Frances Serrant,  and giving idle Canadian goalkeeper Kailen Sheridan rare work.

T&T head coach Kenwyne Jones seemed to fall for his own hype that his Women Warriors were good enough technically, to put the ball down and play with the Canadians, rather than execute damage control.

Jones' squad might have been better served to try and win free-kicks, and also force the Canadian defenders back with balls over the top. Instead, every ball played up front was played to the feet and easily lost.

The back five comprising keeper Forbes,  Victoria Swift, Rhea Belgrave, Cecily Stoute and Chelsi Jadoo were capable enough, by those in front of them were woeful—especially in the wide positions where Canada found great joy, since T&T were too many times caught out of position.  Central midfielders comprising captain Karyn Forbes, Asha James and Chelsy Ralph delegated work, rather than work themselves and allowed the Canadian over-lappers to stroll into the spaces and overwhelm already hard-pressed defenders.

With even a two-goal deficit looking a relatively good result, rather than consolidate, the Women Warriors were spread out and played neither good defence nor offence and by the final ten minutes when legs were tired and mental discipline gone, they lost all shape and capitulated.

By full time, it ended no different than most previous encounters against Canada. Deja Vue indeed, and Jones did no worse than the 2016  meeting between the teams, which also ended 6-0 —with a Women Warriors team containing all the best T&T players of the last decade.

In 2008, Canada also won 6-0 and in 2000 by a 7-1 margin.  Trinidad and Tobago did manage a 1-0 win during a 2010 Olympic qualifier, when former head coach Jamal Shabazz bunkered down and offered little in attack,  except the occasional run forward by striker Kennya Cordner. And five years later, T&T escaped with only a 4-0 drubbing.

Tuesday's result was just more of the same. Except for the Americans, Canada also regularly beat up on all the other CONCACAF teams, including Mexico, Costa Rica, Jamaica, Haiti and Panama.

T&T are back in action on Friday against a faster Costa Rica who defeated Panama 3-0, before a must-win encounter against the more on par Panamanians.

To Jones' credit, his team did show enough to suggest that with some adjustments, his players might actually be able to play against their next two opponents, although Costa Rica will be tough as well.