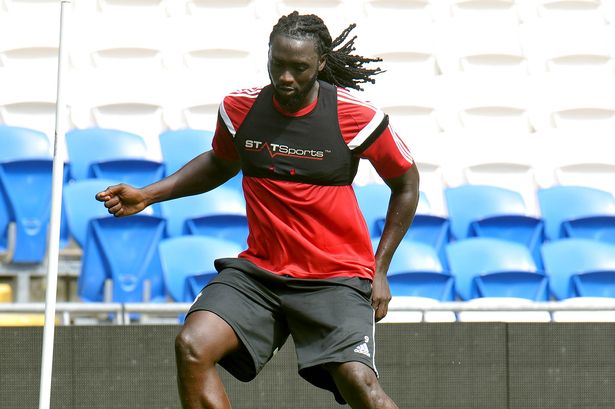 Cardiff City striker Kenwyne Jones is being linked with a possible move to Israel as his Bluebirds future remains in doubt.

Jones is yet to start a match for Cardiff this season after also being linked with the likes of Sheffield Wednesday and MLS side Columbus Crew throughout the summer.

The Trinidad captain was loaned to Bournemouth at the end of last season and could be a big name player to leave Cardiff City Stadium before the transfer window closes on September 1.

Israeli journalist Raphael Gellar, who is a correspondent for BBC World Service, reports Jones is looking at options in Israel, with Maccabi Tel Aviv and Haifa the only two clubs thought to be able to pay him.

Jones is believed to be the highest paid player at the Bluebirds, and it is known Russell Slade is keen to add another striker to his squad in the next fortnight.

Slade already has the likes of Joe Mason, Eoin Doyle, Alex Revell, Federico Macheda and Sammy Ameobi to choose from and it would not be a huge surprise to see Jones leave the club.

The Cardiff manager has also admitted he will be unable to sign a big name player unless he sells one of his top stars.

Jones made his first Championship appearance of the season against QPR on Saturday, coming on as a substitute for Alex Revell in the 59th minute.