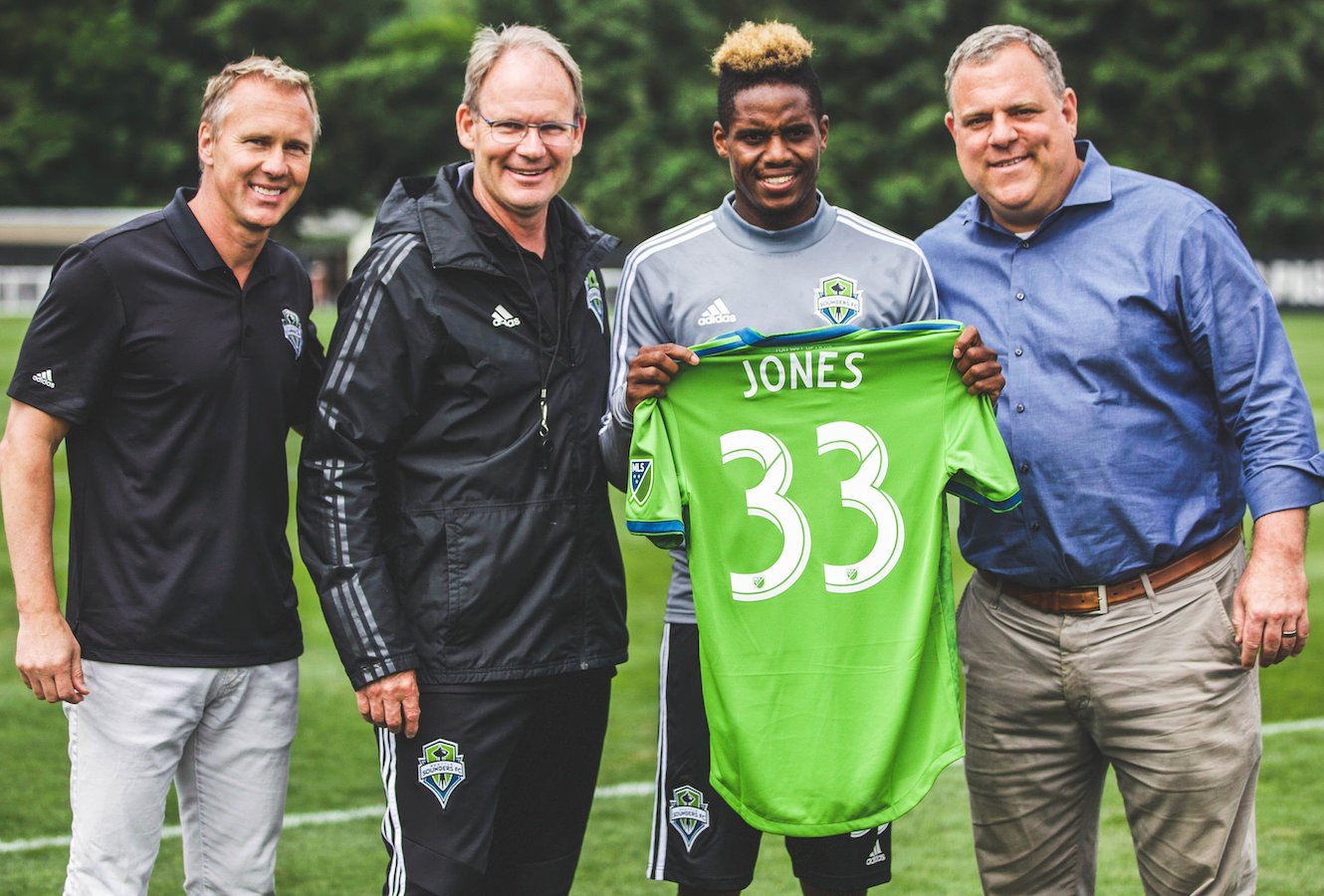 There was a familiar face at Starfire Sports on Thursday, as Joevin Jones trained with his teammates for the first time since he rejoined the Seattle Sounders on May 8.

Jones, who spent two seasons with the Sounders before joining SV Darmstadt in Germany’s 2. Bundesliga, landed in Seattle on Wednesday and was eager to reunite with the club.

“It feels great to be back home,” said Jones. “I feel welcome from the fans and the coaching staff, and I’m happy to be back.”

Jones spent the majority of his first two MLS campaigns — the first with the Chicago Fire in 2015 and the second with the Sounders in 2016 — as a buccaneering fullback, pushing forward into the attack and creating chances with his technical combination play. The Trinidad and Tobago international enjoyed a breakout season in 2017, tallying 11 assists while routinely playing as a left winger en route to a second consecutive MLS Cup appearance.

Those performances garnered interest from Europe, opening a professional pathway he had craved ever since he signed his first contract with W Connection in his home country.

“As a kid, I always wanted to play in Europe,” he said. “So, when I got the chance to go, and I got the opportunity, I took it. I went and I showed what I can do.”

After two seasons in Germany, during which he tallied six goals and helped Darmstadt stave off relegation, Jones jumped at the chance to return to Seattle. Head Coach Brian Schmetzer, who maintained a strong relationship with Jones when he moved abroad, is thrilled to have his former player bolster an already strong Sounders First Team.

“He’s a funny kid,” said Schmetzer. “He’s got a good personality. He’s a talented, talented soccer player. So, I’m happy to have him back.”

The skill set and versatility that Jones brings to the table are a welcome addition, as they provide Schmetzer with further tactical flexibility. Nominally a left back, Jones can line up on the left or right side of Seattle’s three-man attacking midfield as well.

Beyond the formational variance, Jones’ technical acumen and patience on the ball will be critical when the Sounders seek to breakdown bunkered opponents through sustained possession.

“He’s clean on the ball, keeps possession and he runs fast, but he doesn’t look like he’s running fast,” added Schmetzer.

One of the most difficult aspects of integrating a new signing into a team is establishing chemistry with his teammates, on and off the pitch. But with the likes of Román Torres, Cristian Roldan, Stefan Frei, Víctor Rodríguez and Nouhou, there are plenty of players who Jones knows well from his tenure in the Pacific Northwest. Yes, the tactics have changed since 2017, but Jones possesses the requisite skill and soccer intelligence to hit the ground running in Rave Green.

“I can see from the first day [of training] that it’s a little bit different,” said Jones. “But I’m a smart player, so I will get it right in time.”

According to player and coach, Jones could be available for Seattle’s away match against FC Dallas on Saturday (5 p.m. PT; JOEtv, YouTube TV, Univsion-Seattle, 950 KJR AM, El Rey 1360 AM)