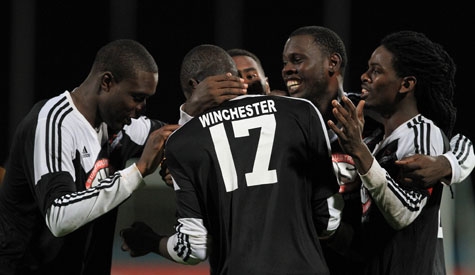 Central FC bounced back from their opening defeat to Jamaica’s Portmore United in the CONCACAF Caribbean Club Championship, with a resounding 3-0 victory over Racing FC yesterday.

Jason Marcano led the way with a first half double against the Haitian club while Tyrone Charles rounded off the scoring in the second periods as Group B action continued in Dominican Republic.

Central FC enjoyed success down the right flank throughout the match and made their opponents pay with repeated raids.

Marcano opened the scoring in the 11th minute, combining on the edge of the box with his team-mates before firing in a low shot into the far post from the right side. He doubled the advantage in the 40th, tapping in from the six yard box after a low cross from the right flank as the half ended 2-0. Tyrone Charles made it 3-0 in the 49th, racing into the box to join another right-sided attack.

The ball was pulled back to the penalty spot and Charles took one touch before striking a left-footer which took a deflection and nestled in the back of the net.

Central FC moved within reach of the Concacaf 2018 Caribbean Club Championship semi-finals after dispatching Haiti’s Racing FC 3-0 in Group B at the Estadio Cibao in Santiago, Dominican Republic.

Jason Marcano, 34, sporting bleached dreadlocks and beard, opened the scoring before Tyrone Charles forced an own goal and scored another to put the match out of the bottom-placed Racing’s reach early in the second half as the Couva Sharks ran away comfortable winners.

But Central, the 2015 and 2016 champions, need another victory on Sunday against hosts Atlántico FC in the final match of the group to secure a place at the 2018 semi-finals after finishing fourth in the competition last season.

Back then another Dominican Republic side Cibao FC lifted the 2017 Caribbean crown after edging San Juan Jabloteh 1-0 in the final while Portmore United beat Central to the third-place finish.

Atlántico, who were held to a 2-2 draw against Portmore in the second game of Friday’s double-header in Santiago, leads the group with four points but only ahead of the Jamaicans by goal-difference while Central are third with three points.

Portmore, who defeated Central 2-0 in their opening game last Wednesday, will complete their group play against Racing — a side on the wrong end of two 3-0 defeats — in the first game on Sunday and could pile the pressure on Atlántico and Central.

The top two teams from Group B will join Group A winner Club Atletico Pantoja (Dominican Republic) and runner-up Arnett Gardens (Jamaica) in the 2018 CCC finals, with the champions gaining a place in the 2019 Concacaf Champions League, while the runner-up and third place finishers will qualify for the 2018 Concacaf League.

The fourth-place side will face the winners of the Tier 2 tournament -- Caribbean Club Shield -- in a playoff to determine the third club that will represent the Caribbean in the 2018 Concacaf League. The Tier 2 champions, however, must comply with the minimum CONCACAF Club Licensing requirements to secure participation.

Central, only put together in weeks with thirteen new additions for the campaign and coached by legendary former Trinidad and Tobago forward Stern John, were an improved bunch against the Haitians after losing disappointingly to Portmore.

Marcano fired the Couva Sharks ahead after just 11 minutes from the right, sending a low strike into goalkeeper Floreal Jodelky’s far netting after a move involving Darren Mitchell and the assist from Densill Theobald.

Charles then forced an own goal through defender Paul Marckendel who inadvertently sent the winger's low dangerous cross -- intended for Marcano -- past Jodelky to cushion Central 2-0 five minutes from the break.

Earlier, Racing were fortunate not to concede with Central's Taryk Sampson and captain Carlyle Mitchell getting dangerously close with headers off separate corners.

Racing, meanwhile, had the ball in the back of the Central net on the half-hour mark through Jean Pierre Guerson but the midfielder’s effort was ruled offside.

Charles would however put the match beyond Racing’s reach four minutes into the second half when his deflected shot ended in the back of Jodelky’s net for the 3-0 score after controlling a right side feed from Central’s most exciting player of the game, Nathan Lewis.

Note - Jason Marcano has lifted the Caribbean Club Championship trophy on two occasions with Central FC.  On Friday, he scored in the Sharks’ 3-0 win over Racing FC, giving the Trinidad & Tobago power hope that a third title is possible. He spoke to CONCACAF.com after the match.