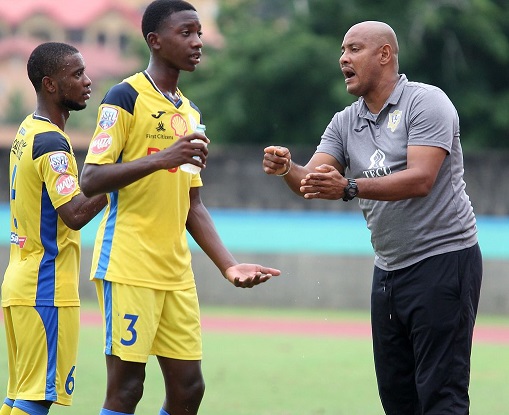 On Tues­day, Coop­er said it could be a case of de­ja vu if his play­ers do not win on Wednes­day.

In his school's last In­ter­Col fi­nal match in 2016, they de­feat­ed San Juan North 2-1 in the League but lost 1-0 to them in the In­ter­Col fi­nal. This year, the south­ern­ers were again 2-1 win­ners over the San Juan boys, but this time they will be hop­ing to pre­vent the jinx of an­oth­er loss to the same team.

"Af­ter los­ing some nine play­ers from last year, we have made it very clear this year that it would have been a re­build­ing year for the team, and to be fair to them, they have ex­ceed­ed our ex­pec­ta­tions so far, be­cause we were not ex­pect­ing them to achieve as much as we have," Coop­er ex­plained.

He added, "We are al­ready very proud of them so what I want is for the young play­ers, is for them to go out there and have fun, do their best, and try to win the match." The irony, how­ev­er, is that Coop­er's 'young' bunch of play­ers will have the task of earn­ing the school their sec­ond In­ter­Col ti­tle in more than 44 years.

Pre­sen­ta­tion's last In­ter­Col win came back in 1975 and de­spite the in­ex­pe­ri­ence of the team this year, they have racked up a few im­pres­sive achieve­ments, such as con­ced­ing the least amount of goals for the Pre­mier Di­vi­sion held ear­li­er (7 goals) and just two in the In­ter­Col play-offs. The south­ern­ers al­so fin­ished the League in the sec­ond po­si­tion and will be in a sim­i­lar po­si­tion should for­tune not favour them this af­ter­noon.

Mean­while, San Juan man­ag­er Stephen Clarke said his team wants to fin­ish the sea­son with a bang, by win­ning it for a large num­ber of play­ers who will be leav­ing the school af­ter this sea­son. They in­clude in­stru­men­tal strik­er Re­nal­do Boyce, Isa­iah Chase, Ma­lik Far­ri­er, Eli­jah Gar­cia and Kendo Math­ias, among oth­ers.

"We are liv­ing our dream of play­ing on the first and last day of the SS­FL, so why wouldn't we want to win? At this time we feel very con­fi­dent that we are go­ing to win the ti­tle, once we dig deep and play the type of foot­ball we know we can play. Too be­sides, we will have sev­er­al play­ers play­ing their last game, so we want to win that for them," Clarke said.

He dis­missed con­cerns his team was beat­en by their coun­ter­parts in the League, say­ing, "They played us when we were go­ing through a dif­fi­cult patch, but now it's the fi­nal and the play­ers are aware of how im­por­tant it is for them," Clarke said.

Intercol Boys, Girls champs to be decided at Couva.
By Joel Bailey (Newsday).

THE 2019 Secondary Schools Football League (SSFL) season will conclude on Wednesday, at the Ato Boldon Stadium, Couva with the boys and girls finals of the Coca Cola National Intercol.

The girls decider will take place from 2.30 pm with defending champions Pleasantville meeting Signal Hill, in a repeat of the 2018 final.

Pleasantville and Signal Hill had one-sided results in their respective semi-finals on Sunday.

Pleasantville trounced Five Rivers 8-0 at the Manny Ramjohn Stadium in Marabella. Latifha Pascall netted twice, in the 48th and 65th minutes, and there was a goal apiece from Aaliyah Pascall (16th), Kurshell Allen (42nd), Alexcia Ali (56th), Akyla Walcott (61st) and Chrissy Mitchell (76th). Pleasantville also benefitted from an own goal, in the 38th.

In the other girls semi, Signal Hill hammered Carapichaima East 8-1 at the Plymouth Recreation Ground. Tiah Crichlow led the way with a hat-trick, Celine Loraine contributed a pair and there was a goal each from Dilleasia Nicholson, Jelese Alexander and Aaliyah Alvarez.

And, on Friday, the Shawn Cooper-coached outfit cruised to a 3-1 win over St Anthony’s in the second game of a National Intercol semi-final double-header at Couva.

And San Juan North, coached by Jerry Moe, defeated Carapichaima East 2-0 to book a ticket to the final.