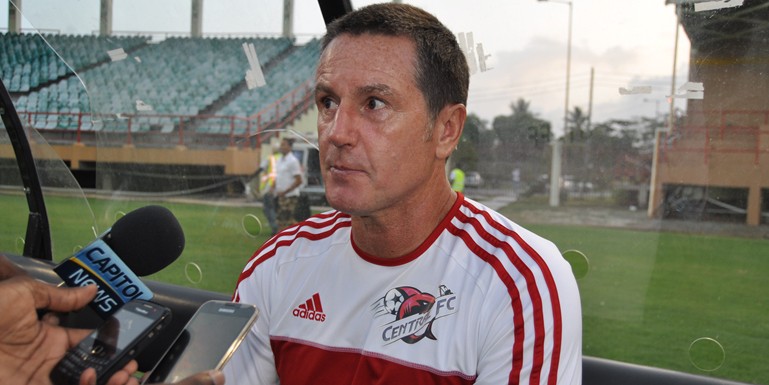 Terry Fenwick looks set for a sensational return to the Pro League with increased powers to boot, as the successful and combative English coach declared that he will lead North East Stars into battle for the 2017 season.

The deal, according to Fenwick, would give the former San Juan Jabloteh and Central FC coach full authority over all football operations at the club, although Stars owner Darryl Mahabir remains as chairman.

“Over the last month, Darryl Mahabir and I have met on several occasions to figure out how we will handle the situation,” Fenwick told Wired868. “He will remain as our chairman but all football matters will come under my remit, so he can get on with his outside interests.”

Mahabir could not be reached for comment. However, a senior official at Stars confirmed that a formal deal between the two parties appears to be a matter of when and not if.

“Basically, the plan is for Terry to take over the running of the club,” he said, under the condition of anonymity. “The confirmation should happen within the next 24 hours.”

Arguably, the most eye-raising aspect of Fenwick’s return lies in his new base. Stars, who initially played at Ojoe Road in Sangre Grande but have not had a home for years, have agreed a deal with the Arima Borough Council to move the club to the Arima Velodrome.

“We feel that we have got a bit of a coup there,” said Fenwick, a former England World Cup player and Tottenham Spurs captain. “The Arima Mayor [Lisa Morris] is quite keen for us to use the Velodrome as a home base. The Velodrome is possibly the only stadium that is right in the heart of a community.

“Everything revolves around the Velodrome and it has such a great following. From my experience in the past, even minor league games at the Velodrome would attract 1,000 fans and sometimes more.

“It is a focal point [for Arimians] and this is something we hope to take advantage of.”

Santa Rosa played at the Centre of Excellence in Macoya for the last two years while they used the UTT facilities in Malabar before that.

Morris hopes the two clubs can return the spotlight to a community that once produced or showcased talented players like Kerry Jamerson, Timothy Haynes, Kerwin “Papa” Emmanuel, Derek King, Dwayne and Craig Demmin and the late Mickey Trotman.

Morris knows first-hand the power of sport in the borough. Her father, Raymond Morris, had close ties with the Arima Memphis football club while her grandfather, Leroy Morris, was a footballer before he became Arima mayor.

“Officially, Mr Fenwick will receive his [confirmation] letter on Thursday but it was already discussed and decided upon unanimously by the Borough,” Morris told Wired868. “We are just excited that someone of Mr Fenwick’s international stature would come here and [help] Arima to be the football mecca as it once was back in the 1970s and 1980s.

“So we hope with Mr Fenwick and Mr Look Loy, we can once more be a powerhouse in Trinidad and even the Caribbean.”

Two years ago, Fenwick was on the verge of a similar relationship in the Morvant/Laventille region, which had the blessing of then MP Donna Cox and Sport Ministry Permanent Secretary Gillian MacIntyre.

However, the proposal ended in controversy after Kevin Harrison—then advisor to Sport Minister Brent Sancho—ordered MacIntyre to withdraw the Ministry’s financial support.

Fenwick was previously employed by Harrison and Sancho at Central FC and parted way on acrimonious terms, despite helping the pair to their maiden Pro League and Caribbean Cup titles in 2015.

The Sport Ministry subsequently started a probe into its support for the project, which was a collaborative effort by Fenwick and the Ma Pau Casino. MacIntyre gave a TT$450,000 cheque to the fledgling Ma Pau Morvant Sports Club, as was within her remit as PS. However, the application fee for the Pro League was TT$400,000.

Pro League CEO Dexter Skeene said, at the time, that his body felt it was an innocent mistake while the Sport Ministry never proved fraudulent behaviour—although two employees, exclusive of the PS, were suspended pending investigations.

This time, Fenwick appears to have avoided controversy. Harrison claimed that his only concern is regarding the details of Stars’ new partnership at board room level. Once more, Ma Pau, according to Harrison, is involved.

“My only question was concerning the status of Ma Pau,” said Harrison. “To date, I am not aware of the arrangement made between Ma Pau and North East Stars regarding ownership, etc. When Ma Pau were in the League before and they left, apparently they owed players some money. So have they sorted that out first?

“Otherwise, I can’t see it being a problem. We have no problem with [Fenwick]. He always makes football more interesting and I think the League needs that spice.”

So far, Fenwick has not revealed whether he has any financial backers and who they might be.

Arima is already making adjustments for the new year and Morris said Sport Minister Darryl Smith promised to help develop the India Ground in Malabar, which would allow the Borough to comfortably host Pro League and Super League games without leaving out the Arima League.

“It is exciting times ahead,” said Morris. “We have the room and we just look forward to embracing everyone. I would also like to acknowledge the social aspect of both plans. Both [Fenwick and Look Loy] have promised to give back to the at-risk communities in Arima.

“Santa Rosa have always been closely intertwined with the community but will now actively go out to the at-risk areas while [Fenwick’s] Football Factory is also supposed to come to Arima.”

Fenwick explained how he thinks he can provide a social benefit to Arima.

“We are looking at opening a Football Factory in Arima that will help young players develop and learn the game and get life skills,” said Fenwick. “And by that I mean discipline, communication, leadership skills, confidence and all kinds of life skills. In Port of Spain, we have kids from all walks of life—kids from Morvant and Caledonia who can’t speak to each other on their block but get along at Football Factory.

“Not all of these kids will be excellent footballers. The better youngsters will move on and compete with the professional youth teams. So we see it as a holistic all-round program.

“In Port in Spain, where we attract 175 kids, we can sometimes have as many as 150 parents who come out to watch their kids go through their drills on Tuesday and Thursday evening. So we see that as the family aspect of it…

“We have had a good working relationship with the British High Commission in the past on anti-gang initiatives as well that maybe we can help to get started in Arima.”

The Football Factory, like most football academies, operates with a combination of paid players and others who receive scholarships. Fenwick and Morris said both parties still need to iron out further details of their partnership beyond Stars’ use of the Velodrome.

In terms of the Pro League club’s ambitions on the field, Fenwick promised to create a team capable of challenging for the title within a year and a half. The Englishman unearthed a stream of teenaged talent at Jabloteh—such as Khaleem Hyland, Sheldon Bateau, Ataulla Guerra, Robert Primus and Lester Peltier—and will attempt to use a similar formula in Arima.

“We are looking at the development of young players because there are some terrific young players out there,” said Fenwick. “So we want a handful of experienced players—who are good role models—to lead a young team that might take 18 months to reach their full potential.

“We recognise that we need to have an excellent team and we hope people in Arima are patient as we build. I want a sprinkling of senior boys that will give us some shape to start with, but that will be four or five tops.”

While Fenwick declined the chance to name any youthful transfer targets, he did mention a 41-year-old talisman who worked alongside him at Jabloteh and Central.

The evergreen Marvin Oliver, who spent last season with relegated Super League Premiership Division team, Maracas FC, is first on Fenwick’s list and could operate as a player/coach for Stars.

“Marvin is somebody I have a lot of time for because I recognise his professionalism and how he applies himself,” said Fenwick. “He leads by example and gives good information to the youngsters on and off the training ground. I will speak to Marvin in due course [and] I will like his involvement. But it is still early stages.”

King, who still lives in Arima, is a former Pro League champion coach with Joe Public and steered the Trinidad and Tobago National Under-20 Team to the Caribbean Cup title in 2004. He quit the national team last November after the David John-Williams-led TTFA administration dismissed head coach Stephen Hart.

Fenwick has already approached King and hopes to convince the promising 36-year-old coach to join him at Stars.

“We need people on the ground who are capable of looking after the programme,” said Fenwick. “I would run the programme—to make sure it is delivered with the same quality and intensity—but I want to rely on people like Derek King for his expertise and knowledge of the area.

“I haven’t decided on what role he will have yet because I need to talk to him [formally] to see if he is available.”

The Pro League has not revealed a start date for its new season although it is expected to kick off in May.

Fenwick’s potential move to Arima will mark the first time a Pro League team has used the Velodrome as its home base since Arima Fire in 2000.

Stars used the Larry Gomes Stadium in Malabar in recent years but the inadequate lighting at the venue meant that they often played home games at the Ato Boldon Stadium in Couva instead.

“Darryl has been a bit frustrated not to have a home ground in Grande but he is delighted we got the velodrome,” said Fenwick. “He wants to see his baby, his North East Stars, go on to bigger and better things. He has had several coaches fail to deliver what he was looking for.”

As always, Fenwick backs himself to deliver something special.

The Englishman is the Pro League’s second most accomplished league coach with four titles, which is one short of the five league trophies held by W Connection technical director Stuart Charles-Fevrier.

Fenwick is also the only coach to win league trophies with two separate clubs, although there is a caveat. He spent barely a month at Central when he won his only league trophy with that club in 2014—after Sancho and Harrison replaced coach Zoran Vranes within touching distance of the finish line.

Ross Russell subsequently replaced Fenwick at Central but was fired midway through the season, which the “Couva Sharks” again won. Russell managed two Pro League titles at Defence Force but did not get the chance to match Fenwick’s feat of succeeding at more than one team.

Ironically, Russell coached Stars last season. However, Wired868 understands that all player and coaching contracts at the club expired earlier this year, which gives Fenwick a free hand to reshape the team.