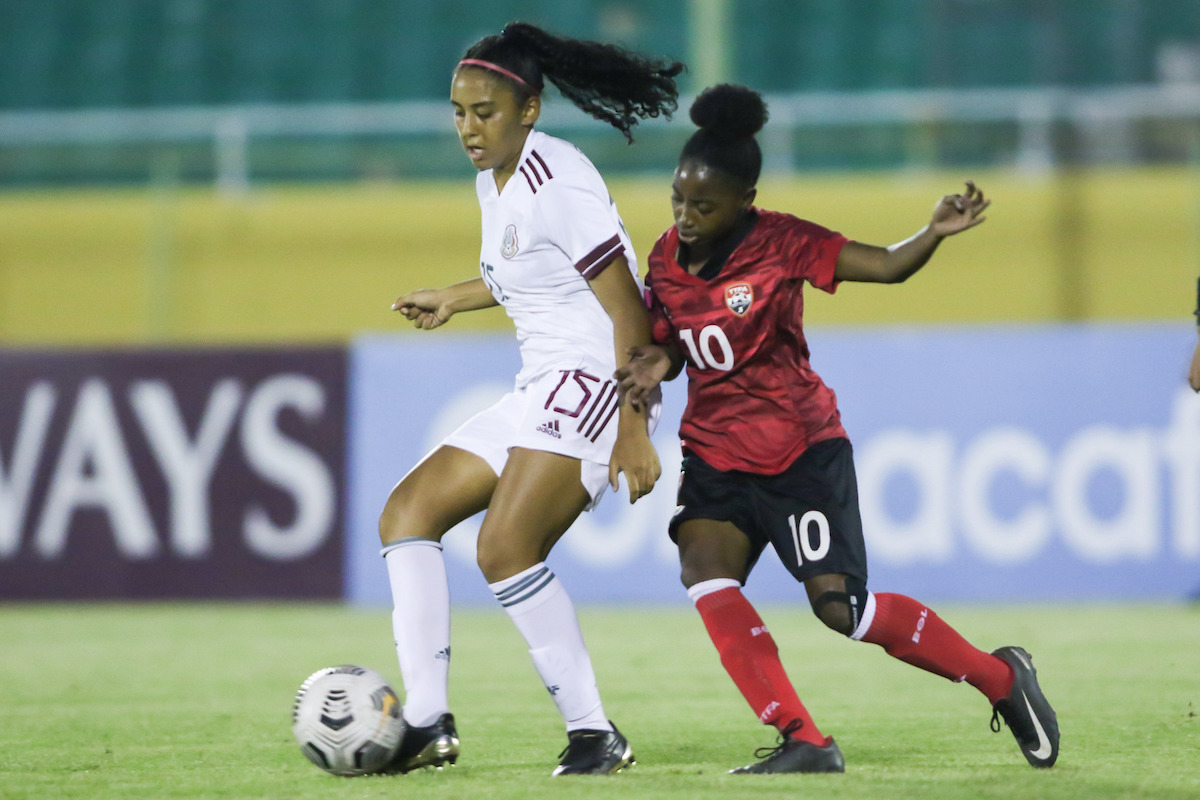 TRINIDAD and Tobago suffered a 10-0 drubbing to Mexico in their final match of the 2022 Concacaf Under-17 Women’s Championship in the Dominican Republic, on Wednesday.

The top three teams in the Concacaf tournament will advance to the 2022 Fifa Women’s Under-17 World Cup in India in October.

In the ninth minute, Grecia Pineda opened the scoring for Mexico. Following a corner kick, Pineda struck a tame volley just inside the 18-yard box that should have been easily dealt with by T&T goalkeeper Sadiel Antoine.

Antoine, attempting to catch the ball over her head, let the ball slip through her hands and into the goal.

Despite Mexico pinning T&T deep into their own half, T&T held their shape defensively.

T&T spent most of the opening period in their half of the field and Mexico kept attacking.

In the 26th minute, Layla Sirdah made it 2-0 for the Mexicans.

Sirdah struck a powerful left-footed shot from 25 yards out that kept low beating the diving effort of Antoine.

Trischell Charles of T&T attempted a shot from almost half-line that did not trouble Mexico goalkeeper Carmen Lopez.

Valerie Vargas’s free kick in the 36th minute from more than 25 yards out went just over the crossbar as Mexico kept the pressure on T&T.

A minute later, Antoine made a quality diving save to deny Mexico another goal.

T&T strung a few passes together in the middle of the field in the 42nd minute, but it did not develop into a chance on goal.

Mexico found the back of the net just before the halftime whistle blew in the 44th minute.

Following a corner kick, the ball fell to Sofia Jimenez who struck the ball in the back of the net.

Mexico were even more clinical adding seven more goals in the second half.

In the 57th minute, T&T hit Mexico on the counter-attack but Charles’ effort was a weak one and Lopez made a comfortable save.

In the 63rd minute, Mexico made it 4-0 through Brenda Vega, before Vega scored again in the 65th minute.

The goals continued to flow as Maribel Flores made it 6-0 in the 73rd and two minutes later the same player scored directly from a corner kick.

Vega scored a header to make it 8-0 and scored again in the 84th minute.

Tatiana Flores completed the scoring in the 88th minute as the contest ended 10-0.

Trinidad and Tobago’s misadventure in the 2022 Concacaf Women’s Under-17 Championship came to a predictable end tonight at the Estadio Olímpico Félix Sánchez in Santo Domingo, as the young Women Soca Warriors were routed 10-0 by Mexico in their final group assignment.

The spanking put an exclamation mark on a harrowing week for the young women who have conceded 19 goals in three matches against Panama, Nicaragua and Mexico while scoring just once.

In 270 minutes of football, Trinidad and Tobago managed three shots on target—exactly one per game—while, tonight alone, goalkeeper Sadiel Antoine had to deal with either 19 or 24 Mexican shots depending on where you get your stats.

Will anyone take ownership, though? Or are standards only for players and not administrators?

It is almost a year since any member of the Trinidad and Tobago Football Association (TTFA)—barring the fledgling coaches association—offered even a peep of resistance at the comical mismanagement and free-falling standards of the local game under Fifa-appointed normalisation committee chairman Robert Hadad and his gang of Nigel Romano, Nicholas Gomez and interim general secretary Amiel Mohammed.

Now, even national players are starting to resemble lambs at the slaughterhouse.

In Hadad’s first meeting with national coaches, two years ago almost to the day, he told his audience that all national youth teams were to remain inactive until he said otherwise. And it was 20 months before he gave them the green light.

The humiliating results of the last two women’s youth tournaments were direct offshoots of Hadad’s oversight, then. And if Spence had any respect for his own reputation as a football coach, he would have invited the HadCo co-CEO to take the team to the Dominican Republic himself.

Not for the first time, Spence was as useful as an umbrella in a hurricane as Trinidad and Tobago faced off against opponents who were so vastly superior that the result was a foregone conclusion from the opening whistle.

The two-island republic lined up in a 5-4-1 formation tonight and defended deep in their own half of the field. But the biggest deterrent to the Mexican team, which made nine changes to their starting team from their last game, was their slow ball movement at the start of the contest as they initially appeared to have misplaced their vigour.

At the interval, the North American nation led 3-0 and Trinidad and Tobago might have been reasonably happy with that.

Mexico’s first and third goals came after the Women Warriors failed to clear corner kicks—although the first item, scored by midfielder Grecia Pineda, owed much to a goalkeeping blunder by Antoine.

And while Layla Sirdah’s shot on the turn for Mexico’s second goal was a thing of beauty, Spence might point out that his defence was slow to react to the impending danger at the edge of their penalty box.

However, even with Mexico clearly below their best for the first 45 minutes, Trinidad and Tobago never looked capable of stringing three passes together, let alone coordinating anything at the offensive end to make a game of things.

In the 56th minute, there was a rare moment of panic for ‘La Tricolor’ as left-back Fernanda Quiroz conceded possession at the half-line and Trinidad and Tobago midfielder Nikita Jackson promptly released pacy forward Trishell Charles. But, clear through on goal, Charles could do no better than offer  catching practice to Mexico custodian Carmen Lopez.

It was Trinidad and Tobago’s first and last meaningful attack of the contest. If anything, it spurred on their opponents.

In the 62nd minute, defender Brenda Vega beat Antoine with a low free kick from 30 yards for Mexico’s fourth item. And the Latin American team never looked back. The next 20 minutes produced five more goals—three from forays down Trinidad and Tobago’s left flank and two with direct strikes from a corner kick and a short corner respectively.

Midfielder Deiry Ramirez somehow scored three of them by finding oceans of space in a Trinidad and Tobago penalty area with as many as nine red, black and white shirts in attendance. And in the 87th minute, forward Tatiana Flores pushed the scoreline into double figures with a predatory close-range finish, which wasted a fine double save by Antoine.

Despite seven second-half substitutions in total and a few breaks for players to get medical treatment, El Salvadorian fourth official Cibeles Miranda offered only one minute of second-half stoppage time—to bring Mexico’s late scoring surge to a halt. It was more compassion than the Trinidad and Tobago players have received from their own administrators in their short stint as international athletes so far.

National Under-17 Team captain Marley Walker, born and raised in the United States, has not looked out of place against any individual opponent since the composed central midfielder made her debut in the 2022 Concacaf Under-20 Championship.

Pint-sized attacker Jeniecia Benjamin—perhaps misused in central midfield tonight—is tenacious, mobile and has a trick or two. Defender Shadea Andrews put her physical presence to good use at times, Jackson was no slouch on the flank, while the likes of Jada Graham, Faith Alexander, Tayeann Wylie, Charles and Cicely-Anne Spencer-Wickham each have a redeemable quality.

It is worth noting that Maria-Frances Serrant, a live-wire on the Women’s National Senior Team, was similarly ineffective at Under-20 level—unable to single-handedly compensate for the Hadad-led normalisation committee’s utter disregard for national youth football, which led to two shambolic Spence-led excursions.

Thanks to Fifa president Gianni Infantino, Hadad has another year on the job and it seems that Trinidad and Tobago’s only chance of improved fortunes in the short term lies in the initiatives of recently re-appointed technical director Anton Corneal, who is working without the guidance of a technical committee.

God alone knows if it will get significantly better from here.