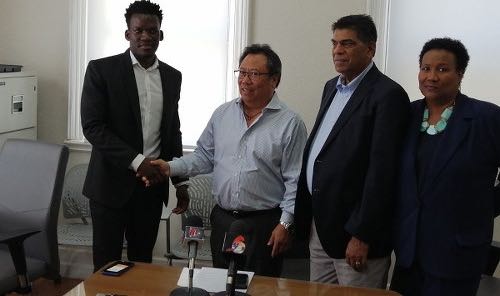 By Gillette’s retelling, the media gathering marked ‘a historic moment’ in the local game.

“I call it the rebirth of football, for want of a better term,” said Gillette, who was making his first public appearance as League Commission chairman—a post he has held for barely two months.

Dutifully, sport journalists present, almost to a man, used ‘rebirth’ in their subsequent headlines. In truth, precious little was said on Monday that had not been aired four months ago when UEFA and Concacaf delegates gave their first media briefing on the proposed competition, which is a combination of the Pro League and Super League bodies.

This merger, mind you, has been so long discussed that it was formally raised back in 2015 when the Trinidad and Tobago Football Association (TTFA) ushered in its new constitution.

The problems identified four years ago—and for almost all of the 19 year existence of the Pro League—is at what price should lower league clubs be granted access to the top flight; and what to do with top tier clubs that did not perform well enough on the field to keep their spots.

The Pro League clubs insisted that they invested millions on their product and needed to protect this investment. And the lower tier outfits argued that the criteria for promotion—a large bond and guaranteed contracts for between 15 to 20 players—was too expensive and was not being met by many of the Pro League clubs anyway.

The ‘solution’ agreed to by the parties speaks volumes about the integrity of the enterprise.

The Pro League’s 10 clubs will keep out all interlopers for Year One and allow one TTSL team to join their ranks in Year Two and Three respectively, once the promoted clubs agree to offer guaranteed contracts to 18 players expected to be valued at a minimum of TT$3,000.

So, by the end of the three year project, there would be zero relegations from Tier One of the competition-formerly-known-as-the-Pro-League with two promotions for clubs willing to meet the significant financial burden for entry.

Naturally, there is no word yet on how clubs will be policed to ensure player contracts are honoured, or what penalties negligent teams would incur.

The ‘fix’, arguably, bears a striking resemblance to the problem.

Gillette was not a man to be bogged down by details, though. The result was a 25-minute press conference in which the League Commission chairman repeated the words ‘transparency’ and ‘accountable’ like a mantra—arguably more times than wayward former NBA star Allen Iverson said ‘practice’ in his unforgettable press conference—without, arguably, providing much of either.

Wired868: “So, to be clear, we are having this press conference; but we are not sure about the date for the start of the League, the breakdown of money [from SPORTT and the TTFA] for the League, or the name of the League…”

Gillette (with a broad smile): “[But] aren’t you glad we are having it, to at least say that [the Pro League and Super League clubs] are having an agreement? […] I think within a next month, we will have all that clearly defined and we will do another one.

“What we want to do is bring you all up to date with every step of the way.”

An update on the new League—christened the ‘T-League’ in some quarters—was not Gillette’s only objective on Monday. Perhaps there was a hint in his opening statement.

“What I think [TTFA president] David John-Williams wants us to achieve this morning is to say what good is happening in football,” said a beaming Gillette. “A lot of things have happened that is good. I know there has been a lot of negativity around football over the past year and through the influence of UEFA as well as FIFA and [TTFA general secretary] Camara [David] and John-Williams, we have been able to do good things on the Commission, since this thing started.”

John-Williams, Gillette explained, was unavailable due to a supposed meeting with Sport Minister Shamfa Cudjoe. These days, one seems as likely to see a soucouyant building a sand castle at Maracas beach as to find John-Williams fielding questions from Wired868.

In any case, Gillette was an impressive proxy, enthusiastic, charming and straightforward—all without actually answering questions.

Four months ago, Concacaf delegates promised a June kickoff for the new competition. So, a reporter wanted to know, is there a new start date?

It was a very Caribbean bit of time-keeping. Like telling a friend that you would meet him promptly at around 5 or 6; or, for the latest, 8pm. But even that was too revealing for Gillette’s taste.

Gillette (interjects): “[…] Hoping to! I want to be very clear about that. We have a lot of work to do between now and then and we don’t want to start on the wrong foot.”

The former Petrotrin chairman is fond of being very clear, especially when he is being vague.

On 28 January 2019, Concacaf official Howard McIntosh revealed that the money injected into the League will come from the following sources: TT$6.3 million from the Sport Company of Trinidad and Tobago, US$1.5 million (TT$10.1 million) from FIFA Forward Programme funds due to the TTFA and US$175,000 (TT$1.2 million) from Concacaf’s subvention to the local football body.

Wired868: “Can you give us a breakdown of where the money is coming from?”

Gillette: “Right now I’d rather stay away from that because we are trying to ensure that this thing balances properly. We don’t want to go into deficit—I don’t want to go into a deficit—so we are going in a back and forth in terms of the numbers. We just wanted to make sure that everyone is aware of what we’re doing and not keep it hidden.

“We want to be as open as possible. But of course we still have to balance this budget properly and we are very, very close to determining exactly what we are going to spend over the next three years.”

Gillette: “I don’t want to give that date, yet. I don’t have conclusion with our matters with UEFA, neither the Ministry… I don’t want you to hold me to a date that I can’t keep. I am being very upfront with respect to that.”

What about the delay in starting the League then? Why, Wired868 asked, have they failed so miserably to reach the June target agreed to by all parties back in January?

Gillette: “A lot of [the delay is down to] administration in terms of the way we go forward; and there is so much regulations from FIFA because that is the people who are putting the money forward for the programme. And what I’ve been told, it’s not the old FIFA, it’s the new FIFA. (Laughs) So we have to dot our I’s and cross our T’s, because it opens up total transparency and total accountability; and I am happy for that.”

What does the ‘old FIFA’ have to do with anything? The timeline was very much set under the ‘new FIFA’, just five months ago; and everyone surely knew then that the League would need administrators.

But, to be fair, he did use catchphrases like ‘total transparency’ and ‘total accountability’; so what’s not to like with that response?

“What is the name of the League?” asked another reporter.

“That’s a good ,” said Gillette, with a good natured laugh. “Some people bandied about [the name] ‘T-League’ and it seems to be gaining strength…”

A press conference to announce a League that, after five months, still has not been named? It would be interesting to know if Gillette did similar launches with any of his private businesses.

Not that anyone was allowed to stray from the point at hand. One reporter, Kent Fuentes, asked whether there was concern by the League Commission as to the impact a lack of domestic football might have on the fortunes of the Soca Warriors for the June 2019 Concacaf Gold Cup.

Gillette: “Can we, before we answer that, try to stick to what we are discussing. Because it is what we’re trying to achieve today… Our objective is to make football self-sufficient in the next three years.”

The ‘before we answer that’ riposte was apparently a euphemism. Gillette never did answer Fuentes’ query. And his suggestion that a discussion on the Men’s National Senior Team—through the context of the collective feet dragging of the League Commission—was too far off course to be taken seriously, seemed all the more curious when he suddenly conjured up a change of scenery for the press corps.

He proceeded to spend roughly four minutes explaining why the facility, mired in controversy due to a shocking lack of transparency, was the answer to Trinidad and Tobago’s sport tourism problems.

And, just moments after declaring the Soca Warriors to be off-topic, Gillette explained how the Couva facility would be used by ‘probably 250 people’ for the Pan American Junior Water Polo competition in two months time.

Wired868: “Are you aware that there are aspects of the Home of Football that are before the courts right now?”

There was an uncharacteristically long pause from the head table. Perhaps Gillette reasoned that his supposed ignorance of TTSL president Keith Look Loy’s battle for transparency in the construction of the Home of Football—fully supported by the High Court—was more than even he could pull off.

Gillette: “I have heard about it; but that’s another story. Let’s put it that way.”

And in this case, ‘let’s put it that way’ was probably a roundabout way of suggesting where Wired868 could put that interruption.

While the League Commission has struggled to get its competition up and running, Terminix and La Horquetta Rangers director Richard Ferguson put over $2 million on the table for an invitational pre-season tournament for the Tier One and Two clubs.

San Juan Jabloteh, Club Sando, Police FC, Defence Force, Morvant Caledonia United and Rangers have already confirmed their participation along with FC Santa Rosa and Cunupia FC who—in a gesture not reciprocated by the League Commission—were invited to the top flight, by virtue of being the TTSL league and knockout champions respectively.

Defending Pro League champions W Connection, owned by John-Williams, turned down the invite while Central FC, North East Stars and Point Fortin Civic allegedly failed to meet the deadline and were not considered.

Gillette said he hopes the Terminix-sponsored competition fills a gap in the dormant local game before the new League kicks off, sometime later this year. The TTFA has verbally sanctioned the competition but is yet to put that in writing.

Gillette: “I will be upfront with you, they still have to write that letter… I hope they agree with the sanctioning letter. Because you know there can be a funny thing between the letter writer and the receiver.” (Laughs)

Wired868: “Are there any terms in there TTFA letter that we should know about?”

Gillette: “Well, I think when it is worked out then you will see it… There is [mention of] appearance fees and there is also prize money for first, second and third place. My concern? That the money gets paid; that’s all. (Laughs) That football is played and money is paid.”

The Pro League has not paid out any prize money to its clubs for the last four years. It is uncertain if Ferguson would appreciate the irony of John-Williams’ concern that bills are paid.

And speaking of unpaid bills, Wired868 understands that TTFA staff have not been paid salaries since March. Had David been paid? And could he confirm the fate of his office staff or offer any words of consolation to them?

“I won’t talk about that,” said David, who promptly swivelled on his heels and walked off.

It was an interesting contrast. A churlish general secretary who would not even pretend to try to answer a pertinent question; and an effervescent commissioner who was better at pretending to respond to questions than actually answering them.