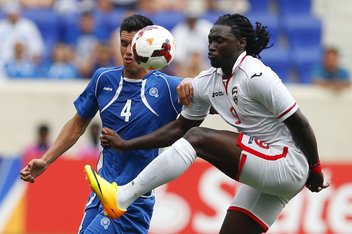 It was not the winning start that we’d all hoped for but Monday night’s 2-2 draw with El Salvador’s was better than Trinidad and Tobago’s two previous CONCACAF Gold Cup encounters.

Both teams battled out before a partisan crowd dominated by El Salvadorians at the Red Bull Arena. There was end to end action and an exciting display by both teams as the game swung both ways over the 90 minutes of action.

T&T got a perfect start when a ball by Carlos Edwards took a favourable bounce to Keon Daniel on the edge of the box and the Philadelphia Union midfielder took clinically slotted past goalkeeper Dagoberto Portillo in the 10th minute.

The goal silenced the El Salvador fans but it may have woke up the players as the Central Americans were allowed to settle and were soon into good stride, going on to enjoy the better of the exchanges for the next half hour.

El Salvador, after a Kevon Carter gave away a free kick just atop the area, tied the game when Rodolfo Zalaya sent his free kick into the right of the net past an outstretched Jan-Michael Williams.

T&T might have shown too much respect to their opponents in the first half and struggled to hold onto possession for long enough periods. Racing Genk midfielder Khaleem Hyland was efficient in the middle of the park as he and skipper Densill Theobald tried to control the pace in the midfield. Middlesbrough right back Justin Hoyte was also solid in the T&T defence that had to dig deep to help T&T grind out the draw.

T&T had a scare three minutes from the break when Rafael Burgos’ drive bounced off the heel of the upright.

The second half saw the introduction of Darryl Roberts in place of Carter who did not find his footing on the night and the Turkish-based player, on his second touch of the game, forced an effort just wide.

T&T, thought still vulnerable at times whenever El Salvador  surged into attack managed to spend more time in and around the El Salvador box.  Edwards, who looked in good form with some of his mazy runs, had two good opportunities but could not beat Portillo.

Rodolfo Zelaya directed a close-range header past Williams from a right side cross to give El Salvador a 2-1 lead in the 70th.

Jones, who was cautioned for arguing with Mexican Referee Marco Rodriguez in the 58th minute could not be faulted for effort and got just reward when he ran onto a Joevin Jones long ball and took it down well, turning and  spanking home to send the 300 odd T&T fans and the T&T bench into a frenzy. His first goal for T&T since the one against Guyana in November, 2011, was followed by his trademark celebratory flips.

Osael Romero had another try which came off the post

Williams pulled off the save off the match in the 89th minute to deny a great overhead attempt by substitute Mark Blanco. It was a deserved point in the end and T&T will now see full points against Haiti, which lost 2-0 to Honduras, as both teams clash in Sun Life, Miami on Friday.

Trinidad and Tobago’s thrilling 2-2 draw with El Salvador in their opening round Gold Cup game at the  Red Bull Arena in New Jersey, USA, on Monday night could be described as a narrow escape.

T&T head coach Stephen Hart was not particularly impressed with the result.

The coach said the Soca Warriors needed to “play the ball around more and move the ball forward quicker. If we can do that we will be very dangerous indeed, and we have to build off the second half.”

There were a few positives from the game as T&T were able to get on the scoresheet for the first time in seven international games and also halt their losing streak.

In the first half of the encounter, witnessed by close to 6,000 fans,  El Salvador almost opened the scoring in the fifth minute when midfielder William Castillo flashed his shot wide.

Six minutes later, El Salvador would pay for that miss, Keon Daniel getting a fortuitous rebound, after Carlos Edwards had attempted to thread the ball through to him. Daniel made no mistake, slotting home just inside the 18-yard box on El Salvador’s  advancing goalkeeper Dagoberto Gameiro.

Edwards created several problems for El Salvador down the left side, but they weathered the storm, bouncing back on a counter-attack in the 21st minute. The Soca Warriors gave away a needless foul just outside the 18-yard area, and striker Rodolfo Zelaya curled a stunning free-kick past outstretched T&T goalkeeper Jan Michael Williams to knot up the scores.

For the remainder of the half, the T&T defence was severely tested. And in the 41st minute, Zelaya freed Rafael Burgos down the right side, and as he cut inside the area, he unleashed a powerful grounder with the outside of his boot that had Williams beaten, but it crashed against the post and was eventually cleared.

In the 69th minute, El Salvador punished T&T. Darwin Delgado found space down the right side, burst past Joevin Jones, and angled in an accurate cross to find the head of Zelaya, who found the target.

Almost immediately on the resumption, Edwards made a darting run down the left side and swung  in a cross for substitute Darryl Roberts to slot in at the far post, but with the goal at his mercy Roberts skewed his shot wide.

Just two minutes later, Kenwyne Jones was fed by his namesake in defence, Joevin, with a well-timed long ball. Kenwyne evaded his marker, moved inside the area, and buried his shot at the far post. Hart punched the air in celebration.

In the 78th minute, Edwards had a great chance to put the Warriors ahead, but Gameiro made a point blank one-handed save to deny him.

At the other end of the field, substitute Mark Blanco’s acrobatic scissors kick, which looked destined for goal, was finger-tipped spectacularly over the bar by Williams.

El Salvador continued to press, again hitting an upright, but  the Soca Warriors would hold on for a hard fought point.

T&T will take comfort in the fact that their next opponents, Haiti were beaten 2-0 by Honduras, on Monday.

They know a win over the Haitians, in Miami on Friday, would put them in a good position to qualify for the knockout phase of the tournament.