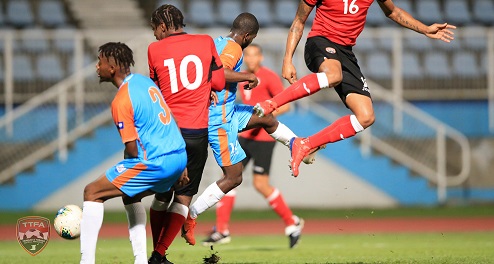 Trinidad and Tobago snapped a 14-match winless streak with a 15-0 demolition of Anguilla in Sunday’s international friendly at the Ato Boldon Stadium. In the process, Dennis Lawrence’s men eclipsed the previous record for the biggest victory by a T&T men’s team in an international outing with the previous best being an 11-0 shut out of Aruba on April 23rd, 1989 in a Caribbean Cup qualifier in St George’s, Grenada.

For Lawrence’s team, debutant Darius Lewis came off the bench to notch a double in the 75th and 79th but it was Joseph who made the most of the opportunities on the night. His goals came in the 14th, 27th, 31st, 33rd and 47th. Canadian-based Ryan Telfer opened the scoring on ten minutes and got a second in the 21st. Ataulla Guerra got two in the 15th and 42nd, Nathan Lewis in the 20th and 40th, Aaron Lester in the 62nd and Jomal Williams finished it off in the 89th.

Danish-born goalkeeper Nicklas Frenderup made his debut in the second half and was called upon to make fine stop to deny substitute Jonathan Guishard in the 79th minute.

T&T will travel to Ecuador on Tuesday for an international friendly against that country’s senior team on November 14th before facing Honduras three days later in San Pedro Sula in CONCACAF Nations League qualifying action.

STRIKER Marcus Joseph hit a handful, literally that is, as T&T stopped a 14-game win-less run with a 15-0 demolition of Anguilla this evening, in a friendly football international, at the Ato Boldon Stadium, Couva.

Ryan Telfer, Ataulla Guerra and Nathan Lewis contributed two goals apiece, while there were one each from Aaron Lester, newcomer Darius Lewis and Jomal Williams.

Tafari Smith scored an own goal to compound matters for the visitors. The result has to be put into context, as Anguilla are the lowest-ranked team in the FIFA rankings (209th) and T&T’s form has been dismal at best, with their last victory occurring on September 6, 2018, against the United Arab Emirates (2-0) in Girona, Spain.

Such as been the level of disinterest in the T&T team, there were barely 500 supporters at the venue, as the game, brought forward by 25 hours due to “FIFA regulations” clashed with fixtures in the First Citizens Cup and Terminix Super League.

The T&T supporters and even the media were not even aware of the composition of Dennis Lawrence’s squad before kick-off, while there was not even a public address announcer present to inform those on hand. Anyway, the scoreline will be a morale-boosting one for the squad, who will travel to Ecuador for a friendly international, on Thursday, before meeting Honduras in a Concacaf Nations League tie, next Sunday.

Telfer opened the floodgates in the tenth minute, with a right-footed shot to the left of goalkeeper Ryan Laddie after the ball was squared back to him from Nathan Lewis.

Joseph got his name on the scoresheet four minutes later, with a low shot from inside the penalty box, after he was picked out by overlapping right-back Alvin Jones. Laddie was culpable for T&T’s third goal, as he found himself in a tangle with a defender and a T&T attacker, leaving Guerra with the easy task of finishing into an open net in the 15th.

Nathan Lewis waited for an off-side call which never came and he banged home a right-footed shot in the 20th minute, with Telfer netting his second goal a minute later, after a give-and-go between Joseph and Guerra. Joseph scored thrice within the space of six minutes – in the 27th following good work down the right by Nathan Lewis; in the 31st when he bundled home a ball sent from Jones; and in the 33rd, with a header from Telfer’s pinpoint cross.

Nathan Lewis notched T&T’s ninth in the 40th, from a few metres out, and Guerra got his second item two minutes later, into an open net after Laddie made a hash of a pass from debutant Matthew Woo Ling. With such an insurmountable lead, Lawrence made four half-time changes, with Danish-born goalie Nicklas Frenderup (on his international debut), Aaron Lester, Duane Muckette and Jomal Williams replacing the anonymous T&T skipper Marvin Phillip, Leston Paul, Guerra and Telfer.

Two minutes after the resumption, Joseph guided a Nathan Lewis shot into the open net after Laddie left his goal exposed.Lester netted his first T&T goal on the hour mark, when he directed, with his knee, a cross from Jones into the vacant net.

Darius Lewis, a 20-year-old US-born midfielder (son of T&T parents), who plays for KI Klaksvik, in the Faroe Islands, picked up a loose ball in the penalty box and slotted home, in the 74th.Four minutes later, Woo Ling’s left-footed drive deflected off Darius Lewis and nestled into the back of the net. And Williams ended the goal-scoring bombardment in the 89th, drilling a right-footed shot to the roof of the net after a ball from Jones was relayed to him by Muckette.