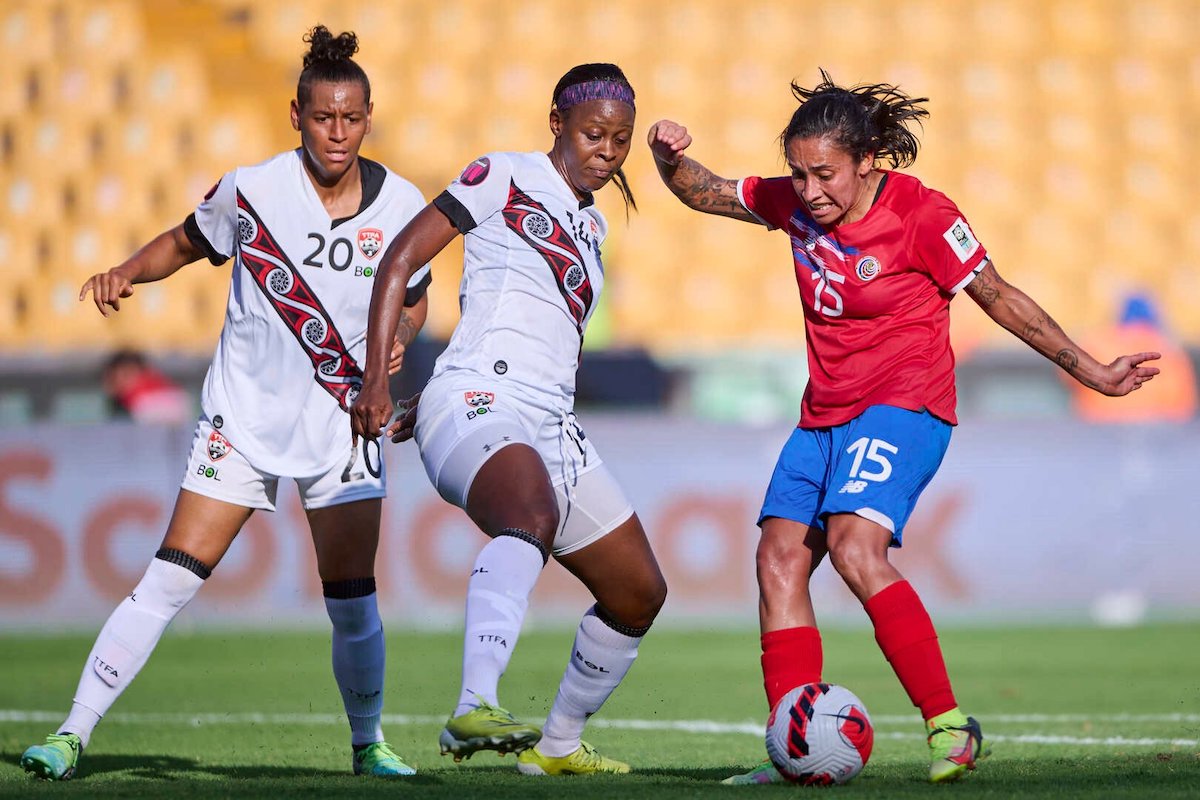 THE TRINIDAD and Tobago Women’s Warriors suffered a 4-0 defeat to Costa Rica which dented their chances of qualifying for the 2023 FIFA Women’s World Cup and the semifinals of the Concacaf Women’s Championship.

The match between T&T and Costa Rica was played at the Estadio Universitario in San Nicolas de los Garza, Mexico, on Friday.

T&T have now lost back-to-back matches to start the tournament and their chances of qualifying for the next round look slim.

T&T’s best chance of qualifying for the 2023 World Cup in Australia and New Zealand is defeating Panama on Monday. If T&T finish third in Group B they will qualify for the inter-confederation playoffs.

After press time on Friday, Canada played Panama in another Group B clash. Canada defeated T&T 6-0 on Tuesday and would have been favourites to defeat Panama.

T&T’s Kedie Johnson got a second yellow card in the 22nd minute for a late tackle which made life difficult for the Women Warriors.

Four minutes before Johnson was sent off Costa Rica opened the scoring. Following a short corner, the ball was played to the unmarked Cristin Granados at the top of the box and she struck the ball in the roof of the net to beat T&T goalkeeper Kimika Forbes.

Before Johnson was sent off Costa Rica had the lion’s share of possession, but after the red card T&T were on the back foot even more.

Forbes did a solid job in goal to keep the score line 1-0.

However in the 33rd minute, Costa Rica doubled their advantage following a Lauryn Hutchinson own goal.

Hutchinson, in attempting to the clear the ball following a corner kick, could only put the ball into her own net.

In the 36th minute, Melissa Herrera almost made it 3-0 with a shot from 18 yards out that just sailed over the crossbar.

Costa Rica continued to press as in the 42nd minute T&T just survived after Forbes made an error.

After Forbes failed to hold on to the ball following a cross, the ball fell to a Costa Rica player but the T&T defence cleared their lines.

Costa Rica had time to find a third goal before the halftime whistle.

Granados scored her second goal when her shot from the top of the 18-yard box deflected off T&T defender Victoria Swift and into the goal.

Against the run of play, Jolie St Louis had an attempt on goal for T&T from a few yards out but her attempt went wide.

In the 48th minute, Costa Rica captain Katherine Alvarado scored the goal of the match to make it 4-0.

Alvarado’s strike from 30 yards out went into the roof of the net.

Costa Rica continued to dominate and create chances in the second half.

Maria Paula Salas and Priscila Chinchilla both got chances on goal. Salas’s effort did not find the target and Chincilla’s attempt in the 63rd minute was easily saved by Forbes.

Forbes had some moments in the match as she came up with a brilliant save in the 66th minute to deny Alvarado.

In the 70th minute, Costa Rica could have gotten a penalty but the Video Assistant Referee agreed it was not a foul by T&T.