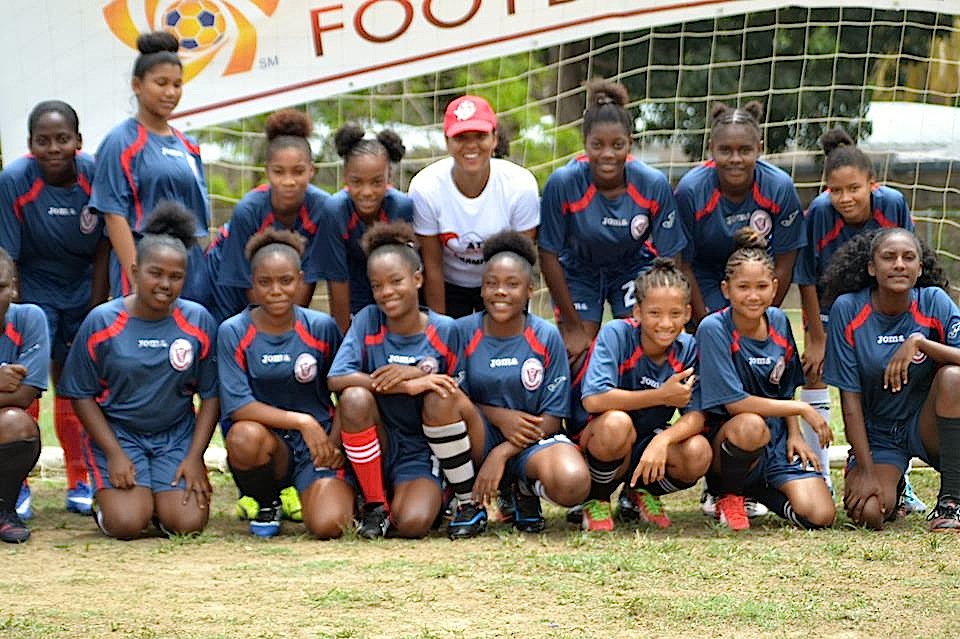 The Trinidad and Tobago Football Association joined with the rest of CONCACAF to celebrate the second annual CONCACAF Women’s Football Day with a Girls Under 15 Festival at St Mary’s College Grounds in Port of Spain on Saturday morning.

The day turned out to be one full of fun, excitement and exhilarating action for the young ladies as TTFA President David John-Williams led a TTFA contingent at the venue where several of this country;s young talent were on display for screening geared towards selection on a National Under 15 Girls team for the upcoming CONCACAF Under 15 Girls Championship at Disney, Orlando in August.

Charles emphasized on the need for discipline understanding the changes happening in women’s football. Attin-Johnson talked about the necessary sacrifices players will be required to make, drawing from some of her experiences, having to take time out from their usual teenage life for National Team training and she encouraged them to focus on their education with the aim of attaining scholarships to further their development.

John-Willliams, who had pledged his FA’s support towards the further development of women’s football, stressed the need for discipline in their lifestyle, the way they eat and train and he also spoke about the sacrifices they would have to make as a National player. He noted that the only place success comes before work is in the dictionary and if they really wanted to be good players, they must commit themselves to hard work and dedication.

On the field of play, players were split into different teams before engaging in 7 a side games while the coaches assessed and watched on. Also present was former Women’s Captain and U-20 Coach, Izler Browne and other coaches and players from the local women’s game.

Saturday’s event was part of CONCACAF’s Women’s Football Day where all Member Associations organized several innovative and impactful activities for girls and women within the region.

The celebration was set up to provide an unprecedented drive in awareness and promotion for women’s football. Furthermore, the event will promote the empowerment of girls and women, while highlighting key values such as leadership, equality and inclusion.

Member Associations helped to inspire the participation in the game through events such as grassroots festivals, matches and skills challenges.

UNICEF also joined in the celebration of the Women’s Football Day, collaborating in promoting messages through their social networks, to further raise awareness of sport as a powerful tool to promote equality in society.