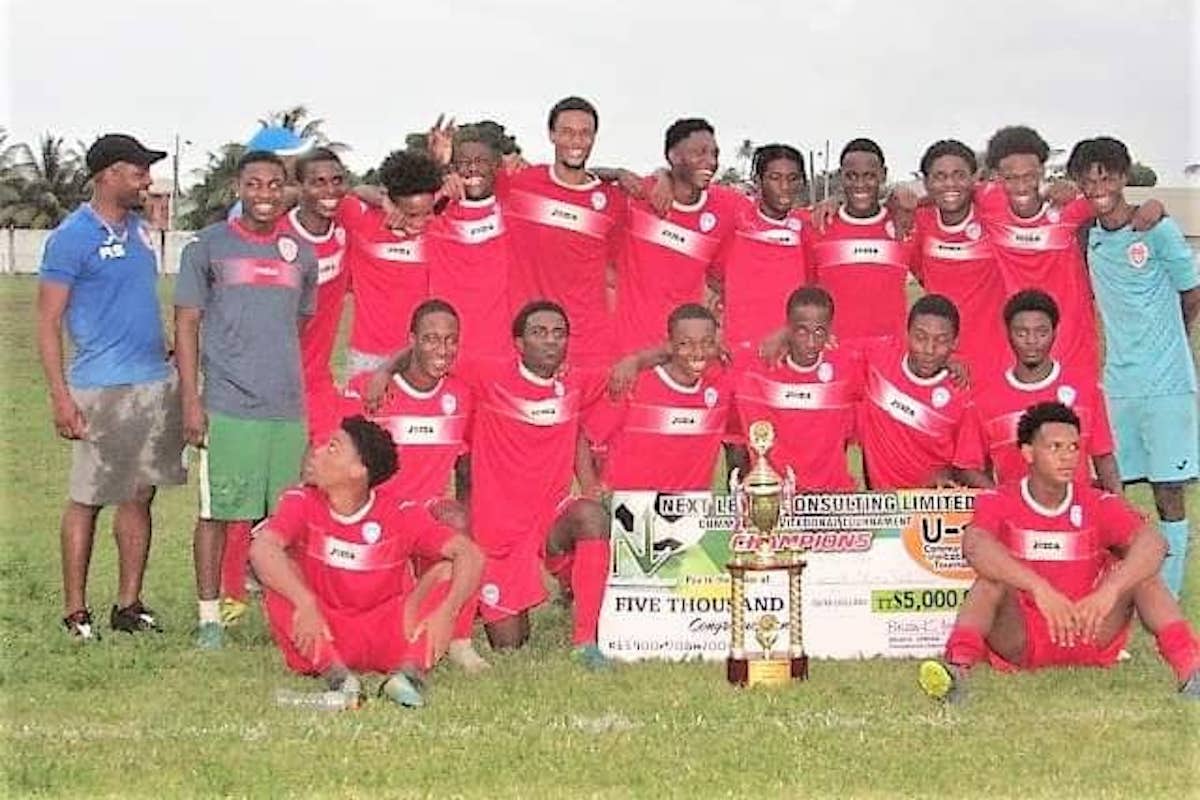 The packed Mayaro Recreation Ground witnessed two keenly contested games on Sunday. MaGuaya United defeated Deportivo P.F. Youths 3-2 to win the Next Level Consulting, Limited U19 Community Invitational Tournament Championship final, in the second game of the top four doubleheader. Before that, Gasparillo Youths were able to edge D.C.S./Dass Trace by a similar 3-2 scoreline, to take third place, in the first game of the doubleheader.

From the beginning of the tournament in December 2019 until the Championship game on Sunday, MaGuaya went undefeated, and were able to narrowly convert home field advantage in front of a large contingent of their supporters. Even so, the plucky Deportivo team from Point Fortin, proved worthy challengers and could consider themselves unlucky to come up short in a topsy turvy game.

The winners will enjoy the Next Level Consulting (NLC), Limited sponsored, five thousand dollar ($5,000.00) first prize, as well as, the Championship trophy and medals sponsored by Ramsingh Sportsworld.

Tournament Chairman, and owner of Next Level Consulting, Limited, Mr. Brian Jordan said, “When we started on this journey, we wanted to make a difference in the footballing lives of these talented youngsters by providing a platform to showcase their talent and skills”

He added, “Without our sponsors, this entire tournament would not have been possible, and we would like to thank Ramlogan and Sons (Couva and Marabella), Ramsingh Sportsworld, Maritime Insurance, the Mayaro/Rio Claro Regional Corporation and National Energy Corporation of Trinidad & Tobago. We also must say thanks to the Tournament Committee (Ms. Sandra Pompey, Mr. Don Griffith, and Mrs. Germaine Jordan), all of whom worked so diligently week in, week out to ensure football and youth were the winners in this tournament. Last but not least, we also collectively wish to thank all of the families, fans, supporters, as well as, all of the teams who were able to compete this year, and look forward to another great season, starting December 2020.”

Next Level Consulting, Limited is a registered local small business specializing in residential and commercial security cameras, alarms, and gate motors. We wish to invite other businesses, big and small, to invest in youth, football and our local communities.

For more information, or to be a tournament sponsor:
Brian K. Jordan

AFTER an impressive unbeaten run, MaGuaya United are the 2019/2020 Next Level Consulting (NLC) Ltd under-19 Community Invitational Tournament champions. The team defeated Deportivo Point Fortin Youths 3-2 on Sunday at the Mayaro Recreation Ground.

The champions were coached by Joseph Weekes, former national under-17 and under-20 captain Leston Paul and Ryan “Fry” Stewart.

In addition to the championship trophy and individual medals, they were awarded a $5,000 cheque sponsored by NLC Ltd.

Weekes has been coaching for over 25 years. Speaking with Newsday, on Tuesday afternoon, he said it was a “fitting” final as both teams performed well.

“We are trying to keep the team together and see if we can get into some other competitions that are upcoming.

“The team was jubilant but as youth players, I don’t believe they really understand what their victory would have brought back to the community.”

Newsday also chatted with Deportivo head coach Selvon Francis who said the tournament went well, but added there were a few issues with officiating.

“But as I tell my players, we focus on what we have control over.

He said the team had a solid performance and that supporters and players from the other team came to congratulate them after the match.

Deportivo eight had four losses and one draw out of 13 matches. Francis has been coaching for 20 years but has only been with this team for two years.

He said the next step for the team is the Youth Pro League which kicks off in two weeks.

“I already know what I need to work on with them. It was a very timely tournament.”

The third-place match between Gasparillo Youths and D.C.S./Dass Trace also took place on Sunday, ending 3-2 in favour of Gasparillo.

Chairman of the tournament Brian Jordan said, “When we started on this journey, we wanted to make a difference in the footballing lives of these talented youngsters by providing a platform to showcase their talent and skills”

“We want to collectively wish to thank all of the families, fans, supporters as well as all of the teams who were able to compete this year, and look forward to another great season, starting December 2020.”

MaGuaya United were crowned as inaugural champions of the U-19 Community Invitational Tournament Championship on Sunday as they defeated Deportivo PF Youths 3-2 in the maiden final of the competition on Sunday at the Mayaro Recreation Ground.

Gasparillo Youths finished third with a similar 3-2 result over DCS/Dass Trace in the opening match of a double header at the venue.

MaGuaya, who played unbeaten throughout the competition, were awarded TT$5,000 as winners—provided by tournament co-ordinators Next Level Consulting Limited (NLC)—along with a trophy and medals sponsored by Ramsingh’s Sports World.

There were 10 entrants from across Trinidad but, in the end, there was a southern flavour to the final four clubs. MaGuaya represents the Mayaro and Guaya constituencies although the club is based in Mayaro while Deportivo PF hails from Point Fortin. Gasparillo Youths, as the name suggests, are from Gasparillo and DCS/Dass Trace represents players from Enterprise in Chaguanas and La Brea but trained at the latter location.

Tournament chairman Brian Jordan, the owner of NLC, thanked sponsors Ramlogan and Sons, Ramsingh’s Sports World, Maritime Insurance, the Mayaro/Rio Claro Regional Corporation and the National Energy Corporation of Trinidad and Tobago for their support as well as the tournament committee of Sandra Pompey, Don Griffith and Germaine Jordan.

“When we started on this journey, we wanted to make a difference in the footballing lives of these talented youngsters by providing a platform to showcase their talent and skills,” said Jordan.